Poker truly is the king of card games. Some people play it just for gambling, some simply for recreation, but for both sides, a game of poker is always a real exercise for the brain. It is probably the only gambling game where a player has an opportunity to release their intellectual power at full blast. The game is not difficult to learn, but it is hardly possible to make good educational progress while not being thoroughly familiar with poker terms the players use today. Read this page to learn about the essential words and phrases frequently used in the game. Discover their specific meanings to understand the concept.
12.03.2022 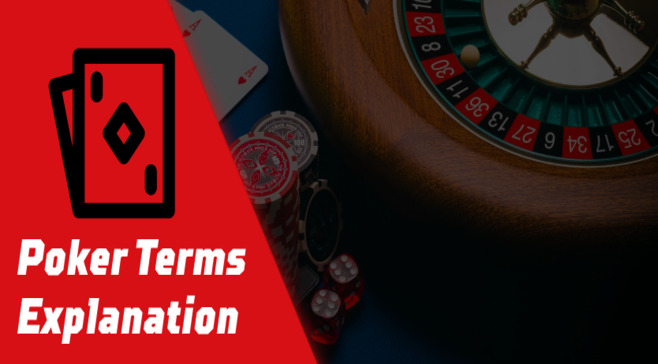 Table of Contents:
The ABC of Poker
The Many Hands of Poker
1. Five of a Kind
2. Straight Flush
3. Four of a Kind
4. Full House
5. Flush
6. Straight
7. Three of a Kind
8. Two Pair
9. One Pair
10. High Card
Learn How to Bet Not to Play Bad
Some Say That Cards and Money Give Off the Same Fragrance

The ABC of Poker

There are many forms of poker, but all of them share the same principle — a player has to collect a set of five cards, called a hand.

The Many Hands of Poker

All existing hands are ranked, and ranks are used to decide who has won the pot (money wagered).

The highest-ranked hand, which is formed of five equally ranked cards. An example is 4♥4♦4♣4♠4. However, note that:

The rank of each combination is determined by the rank of its cards.

This is the second-ranked hand, which shows the sequence of ranks of the same suit. An example is the set J♥10♥9♥8♥7♥. Things to memorise:

The highest cards found in a set will rank a flush.

Three playing cards hold one rank, plus two others hold another identical rank. Another variant is a full boat. If you get this hand — 4♣4♠4♦6♣6♥ — you will say “full house with fours over sixes” or “fours full of sixes” or even “fours full”. In this situation, 4♣4♠4♦ is the first rank and 6♣6♥ is the second.

Rank order is consecutive, and suits are different. Say, it can be 7♠6♣5♠4♥3♥, which sounds like “seven-high straight”. Variants:

This includes combinations like 2♦2♠2♣Q♠6♥ etc. In poker terminology, this hand is also nicknamed trips or, oftentimes, a set.

It is the same as the hand described above but with only one couple.

A weak combination where suits are different and ranks do not match. It is also known as no pair or, unfortunately, nothing. The Highest-ranked card will set the value of the whole hand.

Learn How to Bet Not to Play Bad

Strictly speaking, poker gambling is all about betting. Here are some significant betting terms just to open the door to it:

Check. It is your option not to place a bet, which may be used if no one has made the first bet so far;
Open. If you choose to make a bet first;
Fold. After the first bet, you may discard your hand, thus losing the pot…;
Call …Or you may choose to match the highest of the already placed bets;
Rise. You may even decide to increase your bet;
Bluff. A bet you make while having a hand that is unlikely to win. The goal is to provoke a fold by your rivals whom you expect to hold much better hands;
Value Bet. In contrast to the previous move, this one is made if you have a strong hand and hope to be called by your counterparts with weaker ones;
Cold Call. Here you call a rise during the first round, and it is also your very first action on it;
Overcall. You call a bet when others have already called;
Flat Call. If you call instead of rising while having good reasons to do so;
Slow Play. Despite having good cards, your attitude towards betting is passive, and you prefer flat calls. It is also a strategy, by the way;
Crying Call. If you decide to call on the final round with a hand far from being the best;
Hero Call. You are calling with a weak hand thinking your counterparts are bluffing;
Float. If you want to bluff in a later round, you call;
Showdown. When a few players remain after the final round of betting, they reveal their hands to determine who takes the money;
Blinds. The sort of forced bets to be made by bettors to the left of the button (a marker that shows the dealer’s place). It’s used just to get rid of gamblers with small stacks.

Some Say That Cards and Money Give Off the Same Fragrance

The list of poker names and definitions is long, and there are a lot of betting structures that regulate forced bets, limits, and caps (the permitted number of raises). In order to bet like a pro, you need to know them before sitting down at a table.

It’s best to see poker as a sport, just like chess. Therefore, you need to show your intellectual advantage and use your strategic thinking to win and enjoy the process. Besides, you are lucky, as, on Leon, we have numerous poker variations ranging from traditional Hold ’em to some exclusive titles with more elaborate game rules.

Sign up today, get a pleasant welcome bonus and enjoy virtual poker online from the comfort of your home!